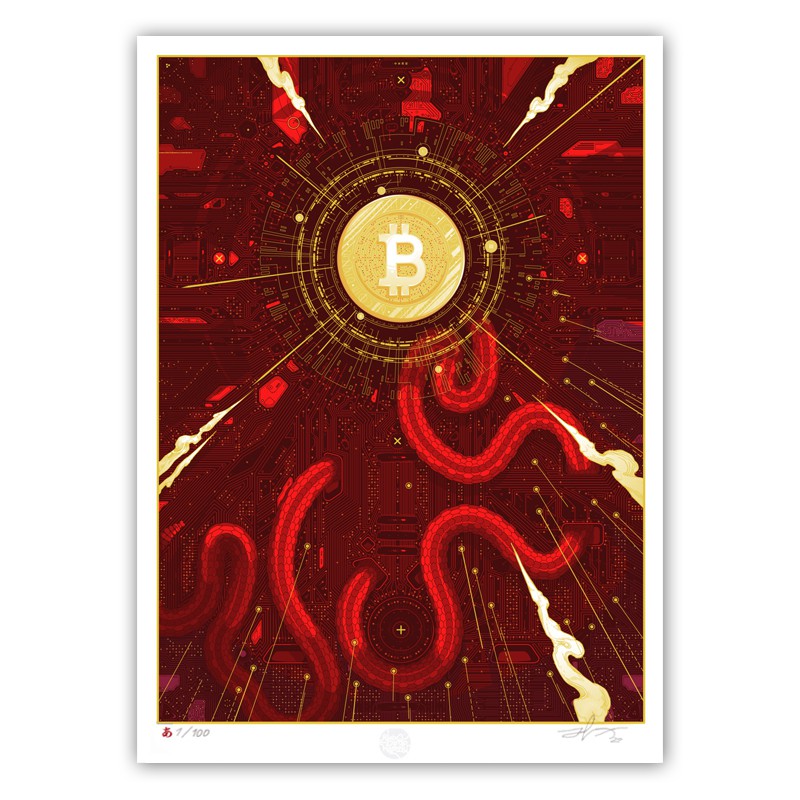 Perhaps the first collaboration between the world of street art and that of cryptocurrencies in Spain and perhaps one of the first high-quality prints on crypto art in the world.

My collaboration with the crypto world goes through the interpretation of its best asset, the well-known bitcoin. I wanted to generate a representative image and at the same time load it with multiple shortcuts to the symbolism of bitcoin and cryptocurrencies. I wanted it to represent the future, technology, the complexity of a globalized world, a wink to finances and wealth. There are three elements that I play with in the art piece, two colors and a snake.

The main color is gold, a universal symbol of wealth due to its exclusive scarcity (bitcoin has been associated multiple times as the gold of the 21st century). Its use in the piece happens to be something that illuminates what is to come, what is about to happen. The light that illuminates a path and generates hope. The points of the circuit are like the lights that illuminate all the roads that lead to Rome ... the center of the world.

Dark red is its antithesis, it represents what is hidden, the darkness, its uncertainty, what it is and what it generates. Also red (both dark red and orange) is the color that can symbolize the primary, the origin, the earth ... in this case also as the element from which everything can change, the ecosystem where the snake moves at ease.

The snake here exerts a double meaning, the threat of its mere existence, everything that aspires to change the world carries an intrinsic danger to the status quo, and as the risk that investments and future bets carry. The shape of the snake, which tends to the center, high up, is an allegory to a bullish stock price chart, to the Moon!

I have added multiple elements in the work related to bitcoin. The name of its possible creator, graphic elements reminiscent of Japanese candles, the date of birth of bitcoin or the word bitcoin in binary code...

You can also pay in cryptos (BTC & ETH) at the end of your purchase process!