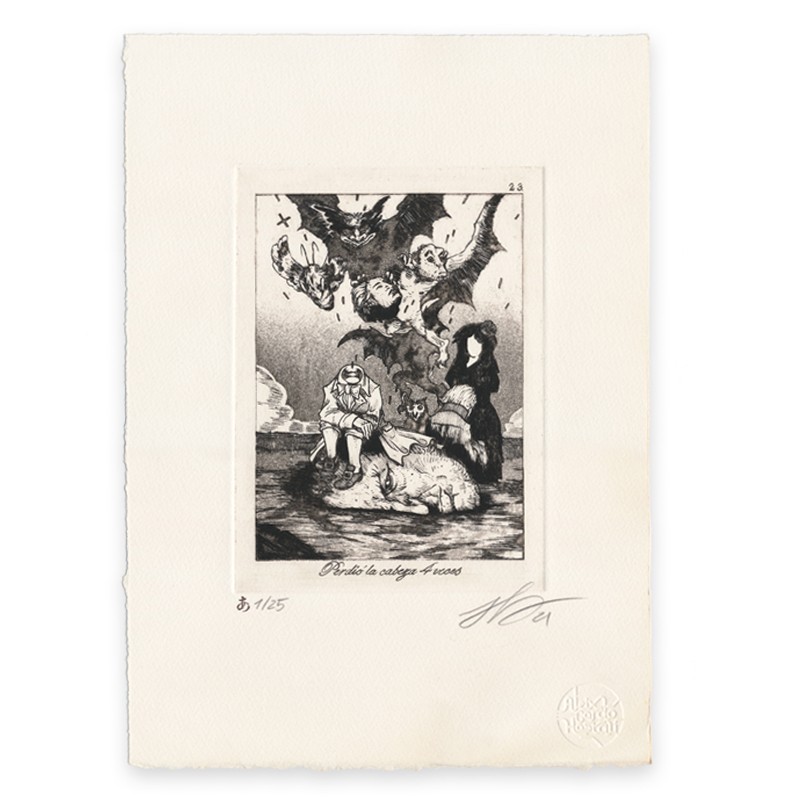 This is my personal tribute to Goya through our first exhibition with Lucha de Gigantes, a homage for the 275th anniversary of the artist's birth. I decided to make an engraving (Goya's passion and the artworks that inspire me the most about him) with the same measurements of paper and stamp, the same technique and a language similar to what Goya used for his engravings.

Goya lost his head four times. The first time when he was still alive, perhaps in his romance with the Duchess of Alba. The second, also during his life, after the attack that prompted him to produce his famous Black Paints and finally rendered him deaf. The third was literal when they exhumed his body to move it from Bordeaux to Madrid at the end of the 19th century, someone had robbed his head off. To this day no one knows what happened to it. And the fourth and last was figured, when one of the most famous statues of him (made by Juan Cristobal) was beheaded after some altercations. In the engraving there are also four heads, three more evident and one in the shadows (lower left corner). One is taken by the monsters of reason, another in its place but enraptured by a “maja”and the last one, half-buried, on which everything rests.

Something so special required a special treatment. The work has been made in the mythical Barbarà engraving atelier in Barcelona that produced the engravings of artists such as Picasso, Dalí, Miró and now Plensa.

You can also pay in cryptos (BTC & ETH) at the end of your purchase process!